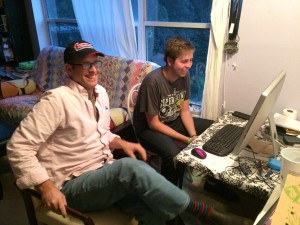 Fans with superstitions have the belief that they can somehow effect the game with something they do, even if they aren’t involved with the game at all. From the point of view of fans who don’t have superstitions, it must be kind of funny to think that someone who has no impact on the game whatsoever could think that something as small as wearing a certain shirt or do a certain routine, could have any effect at all on the game. But for some reason, with no logic at all (probably) fans think and continue to believe in their superstitions.

While fans have their superstations, players and coaches also have superstitions. For instance, Green Bay Packers Head Coach Mike McCarthy has to have a black, or blue sharpie for the first half of a game and have a red one for the second half and New Orleans Saints Head Coach Sean Payton always has to chew Juicy Fruit bubble gum during the game. A superstition a little on the strange, or crazy side was that former NFL defensive lineman John Henderson needed to be slapped in the face, hard, a couple times before each game. To each his own I suppose!

I’m one of those fans who believes in superstitions. During the AFL season when I was working for the Orlando Predators, every home game when I would be there prepare for the game, I had to wear the same pair of khaki shorts and either a plain red shirt, green shirt or gray shirt. Every game-day before I would leave home, I would remind myself that I needed to wear those khaki shorts and one of those shirts, or it could be bad. Then during the game, I always needed to have a pen in my possession so sometimes, I would bring three or four pens with me to make sure I had a pen!

I’m not sure how these superstitions started but for some reason every game before I thought they had an effect on the outcome of the game. I don’t know if these superstitions had any effect or not but I’d like to believe that if I hadn’t been wearing those clothes, or had a pen, things could’ve been a lot worse!

During the NFL season I also have a couple superstitions that I must do before and during any Green Bay Packers game, as they are my favorite team. The first thing that I have to do is visualize every night leading up to the game that the Packers are going to win and I have to imagine the feeling I will have one they win. Then I have to repeat five times that “the Green Bay Packers are going to beat _______.” During the game, I have to repeat that mantra at least once a quarter. More if they are losing.

Probably the biggest superstition I have is that no one can take any pictures during the game. This superstition specifically applies to my mom because she is always taking pictures! This started out in 2009 because I was annoyed that my mom was taking a picture of me when I was watching a game and when the Packers lost I thought one of the reasons for the loss was because my mom took that picture of me! Since then though, I have told my mom she cannot take a picture of me during a Packer game. She has been pretty good with putting up with this superstition until she fell off the wagon in January of this year.

My dad and I were in the middle of watching the Green Bay Packers vs Seattle Seahawks NFC Championship game and I was very nervous since the Seahawks had beaten the Packers the last few times they played each other, starting in 2012 with the “Fail Mary” game. In any case, I was on edge and repeating that mantra I have over and over as many times as I could and it seemed to be working as the Packers were leading 16-7! Morgan Burnett had just intercepted a pass when my mom came over and tried to take a picture of us watching the game and based on my superstition, I tried to tell her no. For the rest of my life, I will never forget what she said and what happened next, she looked over at the screen and said “there are five minutes left! The Packers are going to win the game. You’ll be fine!” So, I let her take the picture and after that, it was all downhill for the Packers.

Suddenly their defense crumbled, Seattle’s offense got hot and somehow a player (who shall remain nameless!) forgot to follow through his simple job of blocking a guy on special teams, to allow Jordy Nelson, the Packers top wide receiver, to corral an onside kick. Needless to say, I told my mom after that game that under no circumstance would she ever take a picture of me during a Packer game again!

Now I’m not sure if any superstitions that fans, players or coaches have affect the game and even though there may not be any logic behind them, I’d like to think that they do have some effect however small. People may not be able to disprove them or prove them but I will stand by my superstition about pictures being taken of me during games!